Vinnies Shops in towns, cities, and suburbs across NSW. 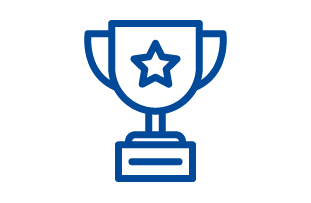 In accordance with the key aims of this Strategic Priority in our Strategic Plan 2020-2022 we will build a financial approach that makes us sustainable and able to invest to do more for the people we serve.

WE WILL BE ENTREPENURIAL IN OUR APPROACH TO RAISING FUNDS TO SUPPORT OUR SERVICE DELIVERY AND:

The Society’s commercial operations and fundraising generated $97.5 million in 2020-21 despite COVID-19 and still managed to exceed the previous year’s total of $95.2 million. This has been the result the improvements and efficiencies made possible by pursuing the strategic plan.

Our most notable activities are our 224 Vinnies Shops across the state, the Container Deposit Scheme, Vinnies Textile Recycling, and a diverse fundraising portfolio.

In addition, tens of millions of bottles, cans, and Tetra Paks are also being diverted from landfill every year through the container deposit scheme, which has the added benefits of helping raise money for the Society, supplying rebates to consumers, and reducing litter.

In 2022, Vinnies Shops will be celebrating 100 years in Australia. With nearly a century of history as the most visible part of the Society’s presence in the community, they are a well-loved institution in 224 towns, cities, and suburbs across the state.

Vinnies Shops are much more than places to buy quality clothing at great prices. They are often co-located with or a conduit to the Society’s conferences or services, expanding the assistance we can deliver.

The sale of clothes through Vinnies Shops provides funds that support our wider efforts to alleviate poverty and disadvantage.

Vinnies Shops keep donated goods out of landfill and we are increasing our ability to divert textile inappropriate for sale from ending up as waste through our recycling efforts. 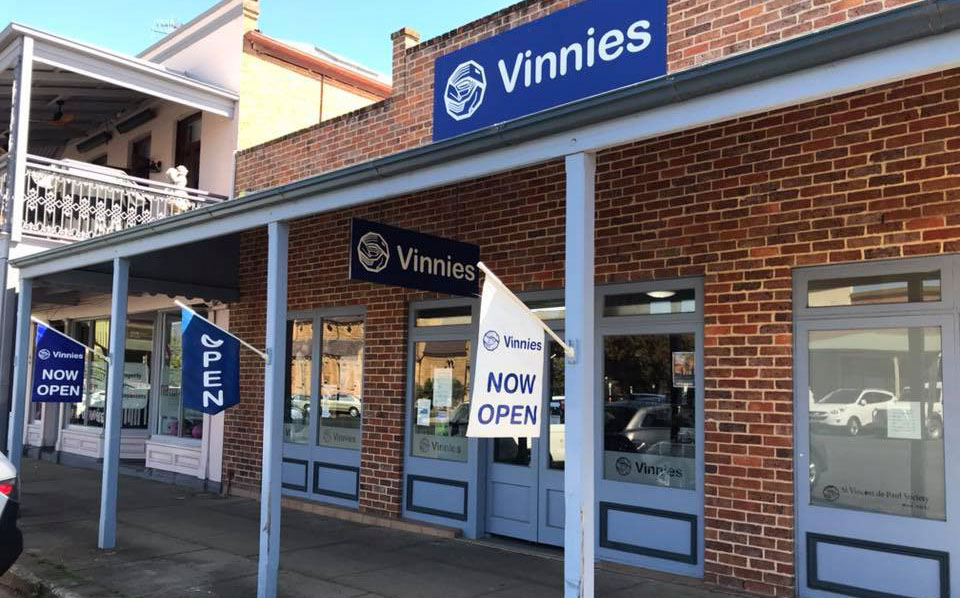 In the 2020/21 financial year, Retail & Logistics was acting as a single business across the state for the first time, which helped deliver a consistent approach throughout NSW. Some of the benefits included increased sales growth of 20% in regional NSW and significant cost reductions in production and logistics.

Our response to the pandemic continued with development of COVID-safe plans; control measures; communication with staff, volunteers, and members; and distribution of personal protective equipment. The Society’s “One Society” approach helped significantly in this regard, with successful collaboration between departments. Vinnies Shops were provided with support by Work Health and Safety, Communication and Marketing, and People and Culture.

E-Commerce became increasingly important as more Vinnies Shops had to close their doors due to the pandemic. While in its infancy, our Online Shop helped maintain a level of sales while our bricks and mortar stores were closed. Donation Stations were also set up during the lockdown period, to enable a way for people to donate their quality clothing while Vinnies Shops were closed. 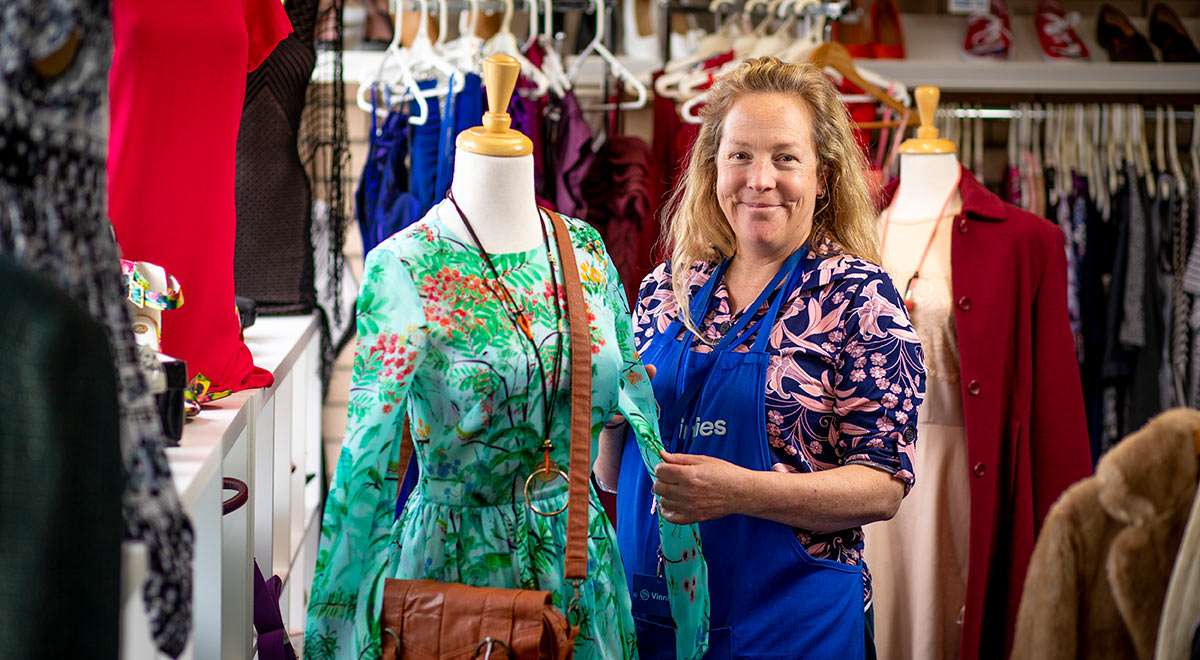 Logistics across a state as large as NSW have always presented challenges. In the 2020/21 financial year, we introduced new systems to leverage our existing infrastructure in the metropolitan area. This has resulted in additional stock sharing, truck runs, coordination of jobs, reallocation of resources as well as the relocation of physical assets. This work will continue into the next financial year.

In the fourth quarter of the 2020/21 financial year, Vinnies Shops made up for lost time due to the lockdown, particularly in regional NSW, with sales beginning to normalise. We are forever humbled by our supporters through the donation of goods to Donation Stations, to customers of our Online Shop and to those who engaged on social media while waiting for the reopening of Vinnies Shops.

Our volunteers, to whom we are always grateful, have stuck with us through thick and thin despite the disruption caused by the pandemic. With many in a more vulnerable group due to age, they have shown a strong willingness to get vaccinated and return to the Vinnies Shops as soon as possible. 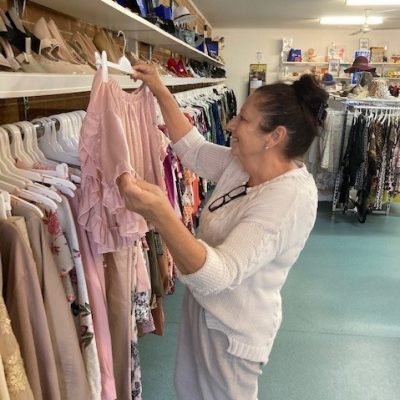 “WE ALL HAVE PASSION FOR WORKING HERE”

Sylvana Gibson is deeply passionate about her role as a Society volunteer.

“I had always been interested in Vinnies, so when I found out more about what they do and the people they help, I wanted to try and give back,” Sylvana explains.

Starting out at her local Vinnies Shop in Byron Bay late in 2020, Sylvana finds great fulfillment as a volunteer and the impact it makes for people experiencing hardship.

“We’ve got a big homeless population [in Byron], so when you start to get to know them, you can have a conversation about what their needs are.”

For Sylvana, another appeal of her role as volunteer shop manager lays in no two days being the same.

One moment can consist of overseeing stock and pricing items for sale, while the next involves sorting through donations and attending to customers.

What remains consistent each time she steps foot in the shop is the care all her fellow volunteers have for one another.

“We’re not just volunteers – we don’t go in because we have to – we do it because we want to.”

With the spread of the delta variant forcing all Vinnies Shops to close across New South Wales, Sylvana maintained contact with her fellow volunteers while gaining a permit to get the shop up and running following the easing of lockdown restrictions.

“I was a bit worried as some of our girls are a bit older, I’ve been messaging them to make sure that they’re ok.”

“We’ve had two of our older guys who’ve been unwell in hospital as well; we all keep in contact to make sure that everyone is ok, and that they know support is available.

“They’re all keen to come back and work – we’ve got a 94-year-old who is just itching to come back!”

Having experienced health troubles requiring extended stays in hospital previously, Sylvana has been heartened by the willingness of volunteers to get vaccinated in light of the higher risks faced by older members of the community.

“Nearly everybody’s had their second shot; it’s safety for the staff and my safety as well.”

“Everybody wants to get back in there because they want to help and are thinking of the homeless and other situations where people need Vinnies’ help.

“All the money goes to helping people, so the more we make the better it is.”

The integration of Commercial Enterprise has continued to yield benefits, both economical and environmental, for Vinnies in the 2020/21 financial year.

Reviews have been completed on our Container Deposit Scheme, Bag ‘o’ Rags, and Vinnies Textile Recycling with a target of continuous growth in surplus.

We are continuing to find new ways of reducing landfill by diverting textile from Vinnies Shops to Vinnies Textile Recycling.

This results in less waste and lower costs associated with this that have helped the Commercial Enterprise team deliver a net surplus of $4.3 million in the 2020/21 financial year. 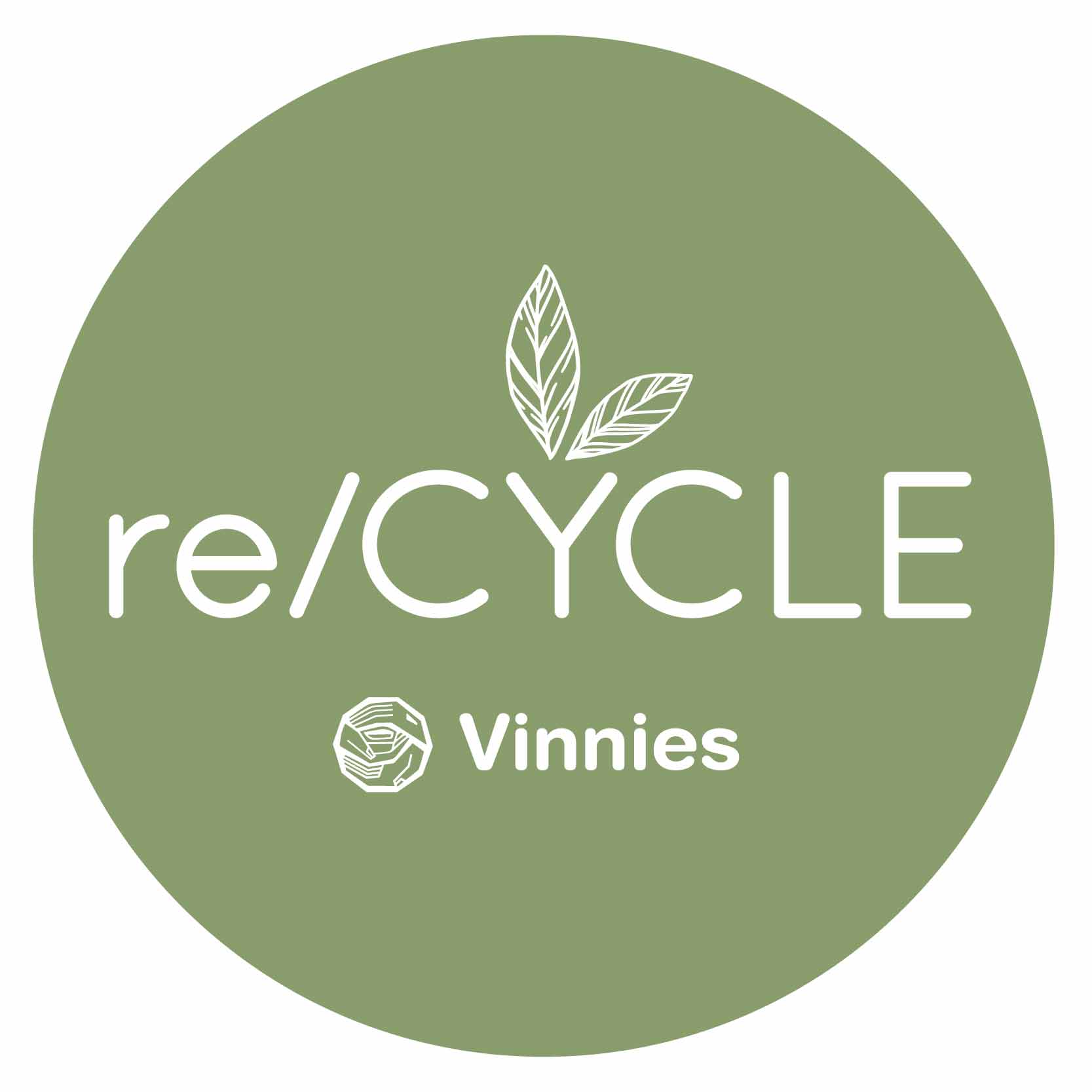 The re/CYCLE range, created through innovative recycling of textile that would otherwise go to waste, has been popular with customers and social media users.

It uses clothes that can’t be resold to manufacture colourful towels, rugs, and more and has been sold in Vinnies Shops around the state.

The expansion of the range and number of stores with re/CYCLE stock has been slower than expected due to interruptions related to COVID.

Rollout of new items in the range has, as a result, been pushed back to next financial year.

Vinnies’ participation in the Container Deposit Scheme has been a massive success, seeing more than 91 million containers processed in the 2020/21 financial year.

This resulted in raising more than $1.5 million for the Society and paying out $8.8 million in refunds to customers who brought their recyclable containers in.

Container deposit schemes work by adding a small extra deposit on top of the price of a beverage such as those in plastic and glass bottles and aluminium cans. These deposits are then refunded to consumers and to scheme partners such as the Society. 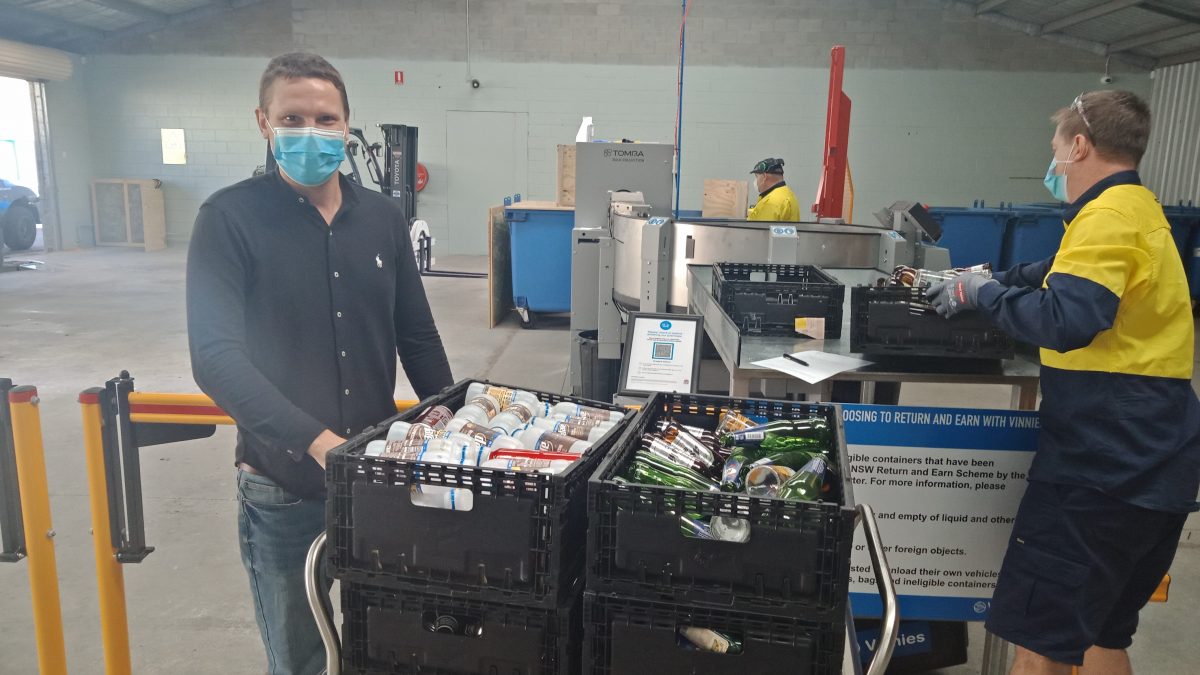 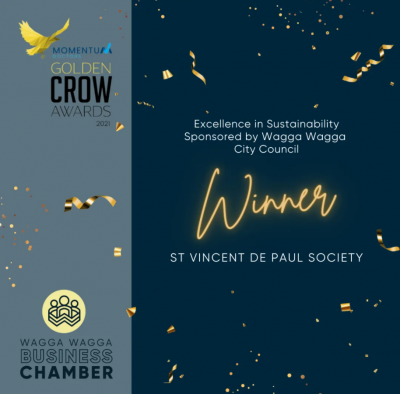 “WE’RE INCREDIBLY PROUD TO BE RECOGNISED FOR OUR WORK IN CREATING A MORE SUSTAINABLE SOCIETY.”

The St Vincent de Paul Society NSW won the award for Excellence in Sustainability, in recognition of being an organisation with a demonstrated commitment to sustainable business practices and working to reduce operational impacts on the environment.

The award, sponsored by Wagga Wagga City Council, was based on a nomination highlighting the Society’s ambition to play a part in reducing the 160 million containers that are littered throughout the state each year.

The Container Deposit Scheme in Wagga Wagga has proven to be a hit with locals as the site processes 1.25 million containers on average each month.

“The Container Deposit Scheme has been a huge achievement over the course of our last Strategic Plan, and we hope to grow the program in years to come.

“It’s really pleasing to see how the Container Deposit Scheme has been embraced by the Wagga Wagga community with around 500-600 people using the depot each week.”

We are a lay Catholic organisation working towards a more just and compassionate society.

We acknowledge Aboriginal and Torres Strait Islander peoples, as the Traditional Custodians of this land, with deep respect. May Elders, past and present, be blessed and honoured. May we join together and build a future based on compassion, justice, hope, faith and reconciliation.

The St Vincent de Paul Society in Australia, ABN 50 748 098 845, Charity Number 23838, is endorsed by the Australian Taxation Office as a Deductible Gift Recipient and therefore gifts of two dollars or more to the Society in each State or Territory are tax deductible for the donor.

We are a lay Catholic organisation working towards a more just and compassionate society.

We acknowledge Aboriginal and Torres Strait Islander peoples, as the Traditional Custodians of this land, with deep respect. May Elders, past and present, be blessed and honoured. May we join together and build a future based on compassion, justice, hope, faith and reconciliation.

The St Vincent de Paul Society in Australia, ABN 50 748 098 845, Charity Number 23838, is endorsed by the Australian Taxation Office as a Deductible Gift Recipient and therefore gifts of two dollars or more to the Society in each State or Territory are tax deductible for the donor.